More than 250 pythons have been captured and released back into Hong Kong since a pilot project was introduced in 2010, according to statistics
revealed by government officials.The snakes, measuring between and 0.5 and 4.2 metres, have been picked up hong-kong)
following reports to police after they have strayed too close to human habitats, said a spokeswoman for the Agriculture Fisheries and Conservation Department. 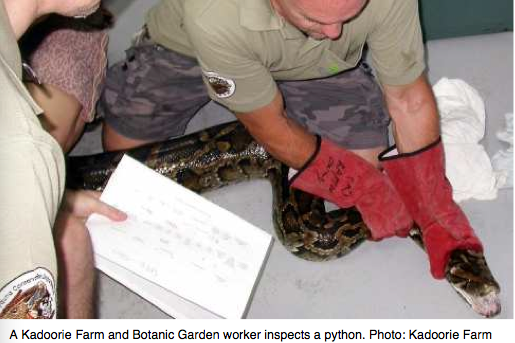 Of those captured, seven have been picked up twice, while one of these has been captured three times after returning to urban areas.
All pythons captured have been microchipped as part of the pilot programme aimed at monitoring the python population throughout Hong Kong.
It is hoped the data collected in the project – believed to be one of the first of its kind in the world – will be useful in building knowledge on the behaviour of the pythons, while also helping the department manage the snakes in a way which maintains the balance of the ecosystem.
Previously, captured pythons were transported over the border and released.
It was a practice viewed by animal welfare experts and ecologists as flawed because of the danger it presented to the ecosystem and to the snakes which have been virtually hunted out of existence in China where their skins fetch as much as 10,000 yuan (HK$12,551) each.
Giving a breakdown of the data, department spokeswoman said a total of 116 pythons had been captured in 2011, 147 in last year and 23 in the first five months of this year. Of these, 250 had been released between one and 13 kilometres from their original capture sites. The remaining 38 had died or been euthanised because of ill health, said the spokeswoman.
The project is being run in co-ordination with Kadoorie Farm and Botanic Garden, which is responsible for assessing the snakes’ health, measuring, microchipping and releasing them.

WARN 2019 annual meeting to be held in Bangkok, Thailand

Need to contact us?
Contact us
Copyright Wild Animal Rescue Network - All Rights Reserved
Back To Top